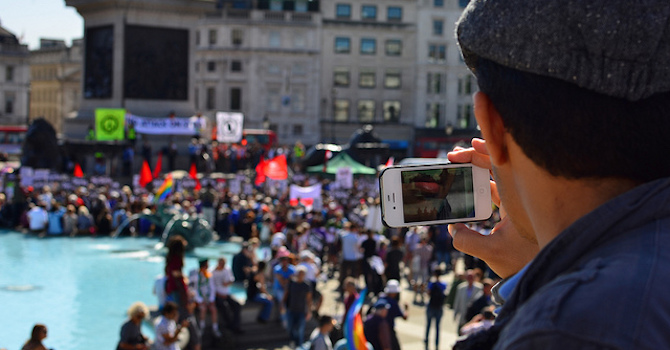 The Tech of Citizen Witnessing in 2015 — January Tech News Digest

In the Tech News Digest, we normally look back over the previous month at the new developments in technology that affect our work (and maybe yours). But this early in the year it’s also worth looking ahead to the rest of 2015 at what we hope to see happen. So here are a few new items from the past month, with a look into how they fit into three of our main tech and advocacy goals for the coming year.

If you follow the WITNESS blog, you’re sure to notice that we are really focused on metadata these days. That’s because as citizen witnesses become a more powerful part of how we experience events around the world, it becomes increasingly important that those witnesses have the ability to make their content easier to find and rely on. And we think metadata can be a big part of the solution to that challenge. Our InformaCam project is about building an app that captures as much metadata as possible and embeds it securely into the photos and videos you create, and in 2015 we are focused are pushing technology companies to recognize the need and help bring these functionalities to as many people as possible by building a “witness mode” into their devices, platforms, and social networks.

This month we saw Facebook take a step in that direction, at least on the side of those consuming news, by allowing users to report news items on their feed that they think are fake. Last year, Facebook tried out a ‘satire’ tag to keep users from being fooled by articles from The Onion and elsewhere, but the new step puts the job of telling others about “purposefully fake or deceitful news” in the hands of users.

Given the contexts in which we work, helping people think through how to maximize privacy, safety, and informed consent is always a priority. And from the tech and advocacy perspectives, visual anonymity — specifically, the ability to blur faces and identifying aspects of a piece of media — is an issue that only gets more and more important to address. We were thrilled when YouTube became the first major platform to make facial blurring possible before posting, but we are still pushing for improvements and wider adoption of those functionalities by other platforms so more of us can protect ourselves and those we film. Again it is a set of simple choices that should come standard in our devices, platforms, and social networks.

And tech news seems to constantly give us more reason for that to be the case as video analytics and recognition tools become more widespread. At the Consumer Electronics Show in January, Intel showed off a new app that gives anyone the ability to do facial recognition in real time; the app is aimed at replacing passwords with a ‘selfie’, but soon we’ll be able to turn the camera around and recognize the unique facial features of those all around us, which means we have to think twice about how we use our cameras and post online, whether we’re sharing videos from a protest or photos from a kid’s birthday party.

This month saw Twitter announce that they’ll be rolling out a native video feature in the Twitter app, and in doing so they are joining companies like Facebook and Tumblr that have already done the same. As video gains an increasing share of the content we consume and share online, we are seeing multiple attempts to better integrate it into existing platforms, and multiple visions of what a good video experience includes as a result. That innovation is exciting, but we’re concerned with making sure it’s done right; the question, then, is how much attention these platforms will pay to the use of video as a tool for reporting and activism. Will this competition bring better ‘witness modes’, privacy controls like facial blurring, ways for important content to reach users, and guidance to creators that can help them stay safe and communicate effectively?

Looking further ahead, WITNESS is exploring how cutting edge tools like wearables, context-based apps, and live video can be used to create better activism experiences. Does the hands-free nature of Google Glass make it a useful tool in protest situation? Can apps that send notifications based on your profile and location prompt you to take action in support of a cause? How can organizers and journalists bring viewers into a livestreaming experience in a way that lets them add their voice, provide context, or influence events on the ground? Our Program Director, Sam Gregory, has been exploring this uncharted territory in recent years, and we are eager to test new tools in witnessing contexts and put ideas into action.

WITNESS obviously has a lot on our tech & advocacy plate this year, and there are even more privacy and policy issues we’ll also be engaged with. What other tools and tech questions should we have an eye on? Let us know here or on Twitter via @witnessorg.