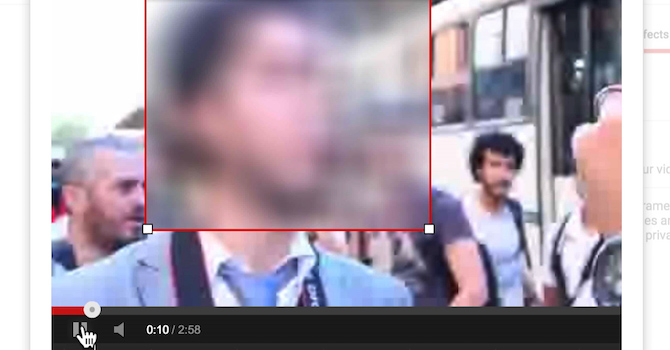 How to Use YouTube’s New Blurring Feature to Protect Identities

This week YouTube released a new version of their custom blurring function. This feature allows users to blur select items in their videos such as faces or identifying information. In this post we will show you how to use the tool and give a brief background on why blurring can be important when sharing human rights video online. This is a big update to the tool and makes the ability to protect those you film significantly more accessible.

For additional background, check out this blog post where we go into depth on the importance of visual anonymity and how expanding the access to tools that allow for it means that more people are empowered to speak out safely and effectively.

The original function allowed you to turn on a facial detection feature that would blur all the faces it could find in the video. If it didn’t quite get all of them, or if you just wanted to blur one or a few of the people in the video, there wasn’t any way to adjust. But that has changed here. Now you can enable that ‘blur all faces’ option or you can choose specific regions to blur; draw a box around a license plate, for example, and the tool will follow it and keep it blurred throughout the video. It’s a robust tool, as it’s using the same underlying technology that Google uses to blur faces in Google Maps and Earth.

When we first wrote about the YouTube tool in 2012, we talked about how much of a timesaver it would be. And that was true, even though a one-minute video full of faces took a half hour to process. But it’s exponentially faster today: going through a one-minute video with a single face, making sure to adjust as the subject turned her head and moved in and out of the frame, took just under ten minutes. Most of that was the time it took to watch the video and manually adjust the blurring region, with each adjustment necessitating just about two seconds of buffering.

How to use it

We put together a quick walkthrough video showing how to find and use the blurring tool. The first step is to find it, since it’s not front and center — you’ll find it in a sub-menu called ‘blurring effects’ that sits within the ‘enhancements’ menu, which you can find underneath the frame of a video you’ve uploaded or by going to the ‘info & settings’ tab within your video manager. Once you’re there, you can choose the ‘custom blurring’ option and draw a box over the face or region you are looking to protect. Note that the tool isn’t accessible on mobile, so even if you upload from your phone or another device you’ll need to get to a computer to use the blurring feature (or use an app like Obscuracam).

As for how to use it, it’s a lot easier to show than tell, so check out the short video for a step-by-step explanation of how to blur a region and adjust as needed to make sure it’s covered throughout. That second step is an important one: the tool is good but not perfect, and it will often lose track of the object it’s tracking, especially if there is a lot of movement. You can watch the video in the blurring editor and make adjustments or extend the duration of the feature as you go.

Once you’re done, you have a few options for saving. One allows you to save your changes so you can revert back later; another saves the blurred version as a copy, maintaining the original; and the most secure option saves the blurred version and deletes the original. The latter is preferable if you’re properly storing your material elsewhere; see our Activists’ Guide to Archiving Video for more.

Complementary approaches before, during, and after filming for human rights

Visual media presents a lot of challenges when using it for human rights, but with greater awareness and user control through tools like YouTube’s new blurring update, more of us can take advantage of its power as a tool for making change.

As big of an advance as this new tool is, especially considering YouTube’s ubiquity, it doesn’t cover all the bases. Here are some additional things to think about: