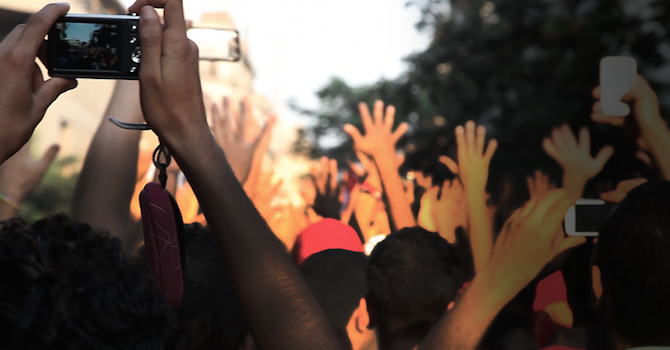 Published November, 2014 by Morgan Hargrave in Video for Change

Creating change is hard, and the world can sometimes be a dangerous place for people trying to do so. As a result, activists and journalists around the world are increasingly turning to secure and open source tools, designed with activism in mind, that allow them to connect, share, and report safely and effectively. And while it would be great if everyone would use those specialized tools, the truth is that protests are being planned over insecure tools like WhatsApp, human rights abuses are being filmed on ubiquitous devices like Samsung smartphones, and movements are using mainstream platforms such as Facebook to gain momentum.

That presents a conundrum for organizations looking to support human rights advocates. The question is whether to focus on building and promoting the use of those tools that “check all the boxes,” so to speak — top-notch security, impeccable trustworthiness, open source, and with all the functions needed to do perfect human rights documentation — or to prioritize advocating to the companies that provide the tools and platforms that are more widely used by citizens worldwide, with the goal of seeing human rights values better reflected in those tools. I talked about this question in a short ignite talk at the International Conference of Crisis Mappers last week.

As always, the short answer is “it depends.” The long answer is that we have to do both. The most secure options for messaging, email, file sharing, etc. provide activists and journalists with the features they need, but in an ideal world we wouldn’t need them. In an ideal world everyone would be in control of their own data and content, and the most popular platforms on earth would also be the most secure and the most effective for sharing and acting upon human rights content.

Since that’s not the case, we do have to do some building. As hackers and activists in the human rights community, we have to build tools that serve the needs of human rights witnesses and then, when we prove what is possible, we have to advocate for the adoption of as many functionalities as possible in mainstream tools. Sometimes we get distracted with dreams of the shiny new tool that will address all our needs, but many human rights and digital rights groups consistently get the balance right — the Electronic Frontier Foundation, for example, is primarily advocating for wider adoption of encryption in the mainstream, but where necessary and possible they close the gap with user-friendly tools like HTTPs Everywhere.

At WITNESS we worked with the Guardian Project on the visual anonymity tool ObscuraCam and saw it get tens of thousands of downloads. At the same time we also pushed online platforms to adopt the blurring functionalities, and YouTube made it happen, so now that feature is available to billions, not just those who have downloaded the ObscuraCam app. We hope to find a similar trajectory for InformaCam, which captures rich metadata to help documenters have their content found, trusted, and acted upon; many of its basic functionalities could be adopted by social media platforms, content sharing sites, and phone manufacturers.

Mainstream tools will never be perfect, because they’re private property, not public spaces. As Ethan Zuckerman said, “Hosting your political movement on YouTube is a little like trying to hold a rally in a shopping mall.” And adding more user control adds complication, which creates risk on top of those concerns. (There’s a third aspect to all of this that we’re leaving aside for a moment, which is government influence and the need for advocates to not just build tools and push companies to improve theirs, but to team up with those same companies to push for policies that respect rights and empower users.)

But the prospect for better advocacy, better reporting, better witnessing, and more is clear, and within the prominent options we have now there is plenty of room for improvement. This need is urgent as the line between who is an activist and who isn’t blurs as technology allows more and more of us to be potential human rights witnesses. With well over 100 hours of footage is uploaded to YouTube each minute, a significant percentage of which may have value in news or justice contexts; and close to half of the world online, the prospects of near total connectivity no longer feels unfathomable.

When George Holliday, a plumber living outside Los Angeles, filmed the LAPD beating Rodney King in 1992, he did not consider himself an activist and he did not use a human rights documentation tool — he used his Sony camcorder. So while WITNESS continues to train and equip activists at the forefront of human rights struggles around the world, we are also committed to pushing mainstream tech players towards human rights values and functionalities.