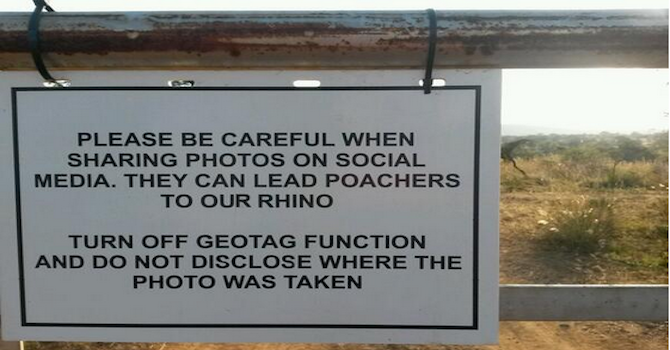 Published May, 2014 by Morgan Hargrave in Video for Change

How Video Metadata Can Help Rhinos, Not Poachers

Quartz had a fascinating item last week about poachers using geotagged Instagram photos to hunt down game in nature preserves in southern Africa. The poachers have been trawling the photo sharing site and gathered the information from the accounts of tourists who had been on safari and documented the awe-inspiring wildlife and landscapes they saw along the way.

The prevalence and deep effects of poaching is such that the story merits concern on that value alone, but we’re also interested in the technological and normative questions brought forth by the poachers’ (savvy yet reprehensible) approach to using Instagram.

The geotags on an Instagram photo are an example of metadata — all that information like names, dates, descriptions, camera types, etc. that tells us more about the context and provenance of a photo. Last year, a well known business exec and fugitive was accidentally outed by Vice as being in Belize when a photo they posted had that metadata exposed too. And the NSA has been vacuuming up the metadata from millions of emails to analyze who is its targets are talking to, when, and about what. So metadata has a pretty bad name at the moment — does that mean the solution is to share less or stay off social media altogether? Probably not.

A better, and more realistic, answer isn’t for users to share less, but for them to have more control when sharing and a clearer understanding of how metadata can work for or against them (not to mention the animals they care about). There are a number of sites and tools that help users strip out metadata from photos and videos — including the ObscuraCam app we worked on with The Guardian Project — and YouTube has gone even further to provide users a way to blur faces in videos.

These approaches make sense for activists, journalists, and normal users who just want to keep certain information private. On the other hand, metadata like geotags, timestamps, and a whole lot more can provide context, a means of verification, and a way to find the right content in a sea of visual media, making it much easier for everyone from social media followers to local news to human rights courts to find video and trust what they’re seeing. So the best answer isn’t one of scaling back our use of technology, but one of deeper understanding and user control of all the tools we use, and that means that incorporating these types of functionalities into consumer tools more broadly should be the goal.

If that sounds a little complicated, that’s because it is. And that means sites like Instagram and tools like the camera apps on our phones have a long way to go towards helping us understand what we’re creating and putting out into the world. But with 100 hours of video being uploaded to YouTube every minute, and increasing numbers of citizen video and photos being incorporated into trials and news coverage, these are questions we have to answer. Plus, nobody wants the vacation photos they meant to share with family and friends to inadvertently help poachers hunt down endangered rhinos.

Interested? Check out what my colleague Sam has to say on how ‘proof modes’ might work online.